As a chronic character creator, I realize that sometimes it's a bit difficult to come up with a backstory for my newest creation. I feel I've exhausted all the interesting and quirky ideas that make a character stand out. This is overdone. That is boring. So, I needed a little help in getting the creative juices flowing.

Included in the Player's Handbook for Dungeons and Dragons 5e is a trinket table at the end of Chapter 5. There you'll find 100 different trinkets: "a simple item lightly touched by mystery." They are not powerful magic items that grant a +1 bonus or recharge every day at dawn. Rather, mundane ones that might make someone go, "Huh. Interesting." Just the thing we need to create an interesting backstory or plot hook for our character.

If you're also having trouble thinking of a backstory, you can try incorporating a trinket into your story, giving your character a hook that thrusts them into adventure.

However, for me, a trinket is not enough. If you are used to solo roleplaying, you may be familiar with this tactic. With two random words, you can build a story inspired by those words and the trinket.

For instance, let's say I roll a 15 on the trinkets table: a bright green feather. I could use a bit of help in fleshing out this story because I'm still completely lost on what this feather means to me. Using a random word generator found online, I generate two words: sympathetic and soar. I can see a story in my head now...

I saw a bird. A bright green bird, soaring over my home town. It was... hurt. It was being chased. I sprung into action and followed. I put myself before it, defending it with my own body. Why were they trying to harm something so beautiful, so pure?

Nice. This could be for a ranger, a druid, maybe even a barbarian. But I want to go in a different direction. Two different random words: create and activity.

I threw paint on the wall. Then glitter, pebbles, more paint, and feathers. A bright green feather was stuck to my hand; I wiped it on the wall, smearing my creation. I took a step back and awed at my masterpiece. If I wanted to finish this, I would need more feathers. Definitely more feathers.

One more, for good measure. Radical and treasurer. Oh, this is hard...

I slunk into the room, envelopped in darkness. I was unseen and unheard. Just the way I like it. I slinked to the dresser and began searching through their things. I swiped a few gaudy pieces of jewelry – one had a bright green feather attached. Who would wear something like this? I took out my black paint and put my message on the wall: WE WILL NOT BE SILENCED. They would know exactly which "radical organization" was behind this theft.

The words are just a guide. Clearly, I didn't incorporate "treasurer," opting to instead transform it into "treasure." And if there's a set of words you just don't like, skip them. I actually rolled for each pair of words, and skipped the pair before "radical/treasurer." I took one look at them and said, "NOPE!"

Here are a few more examples, using the same pairs of words with different trinkets.

A dead sprite inside a clear glass bottle

"NO!" I burst through my restraints, grabbing the glass bottle and fleeing, far and fast. It wasn't fair. Why did my mentor do that? WHY!? I should have kept my mouth shut. I shouldn't have said I saw the sprite. I did this... And now I need to make this right.

I took my magnifying glass and studied the specimen inside the bottle. Something so small had done all of that? I had to figure out how. Not all would be pleased with how I was going about this, but that wasn't my issue. I had my reasons. They would have to deal.

A nightcap that, when worn, gives you pleasant dreams

My grandmother knit me this nightcap herself. She had always wanted me to follow my dreams, no matter how grand they were. When she passed, I promised to do just that. Problem was... I didn't know what I wanted to do. So, I did everything. Every hobby and activity I could get my hands on, I did. I'm still looking for my dream, and having fun until then.

It's my good-luck cap. I put it on three months ago and finally knew how to solve all of my problems. Got it from a dream that night, actually. It was crazy, sure. Radical, even. But it had to work: I was going to steal from the rich. They have more than enough money, right?

I'd named this one Pipsqueek. I lifted the petrified mouse, looking over the house at the other petrified mice and... my parents. I had to leave. It wouldn't get me, too. I still don't know what did this, but I will find out if it's the last thing I do. I will not rest until I get revenge.

Pipsqueek hid in my jacket pocket, scared and petrified of the commotion in the streets. He kept me humble, made sure I kept my wits about me. Didn't keep me from making stupid decisions, though. Like robbing a noble. "It's okay, buddy," I said, looking over the noble's home from a distance. Tonight, I would strike.

If you need names for your characters or others who feature in your backstory, Xanathat's Guide to Everything features a few tables with a lot of names, both for non-humans and humans. The human names are further broken down by real-world places of origin.

And when you're selecting a background, actually take a look at the personality traits, ideals, bonds, and flaws to further flesh out your character and backstory.

If you need some additional inspiration, check out these other blog posts: 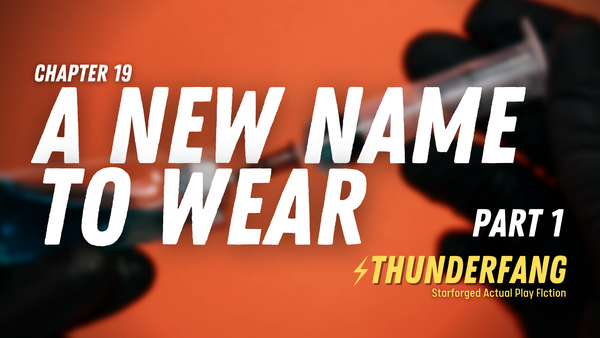